What’s better than starting the day with a great book? Have you been wondering what to read during the upcoming weekend? How about Untangling the Knot by Deanne Wilsted? Well, read on to find out more about the novel.

Or you could be lucky and also be one of the randomly drawn commentators to be awarded a $10 Amazon or BN.com Gift Card. To enter, use the Rafflecopter at the end of this post. To increase your chances, follow the tour and comment. The tour dates can be found HERE. 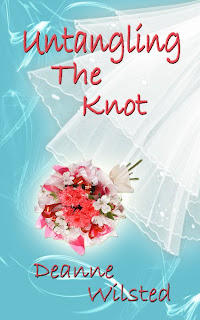 Twenty-eight year old Gabriella Bessu is St. Therese’s meticulous wedding ceremony coordinator. So the fact that she has mistakenly signed her newest couple up for an annulment, rather than a wedding, sends her Catholic guilt into overdrive.

But who can blame her? The groom is gorgeous and his two kids tug at Gabriella’s heart in a way that overcomes all her best intentions. Before long she’s in over her head, fixing her mixed-up plans and helping the children and dad come to terms with their haunting grief for the mother and wife they lost years earlier.

Can Gabriella untangle her own fears and accept the messy life that God has handed them?

The last thing Ryan had expected to see when he’d entered the cottage was Gabriella flat on her back in a puddle of water, inspecting the rear of the toilet. Chloe was holding a bucket and a sopping wet towel, and Peter was nowhere to be seen.

“Dad!” Peter came flying from another room and flung himself into Ryan’s arms.
“RYAN?” Gabriella yelled and quickly sat up. The thump of her head smacking the toilet bowl echoed around the tiny room.

Ryan grimaced. Gabriella sat on the wet floor, near tears, rubbing at the welt already forming on her forehead.

“I’m sorry,” she said, clearly at the end of her rope. “I can’t believe I said that in front of the kids. It’s just, everything has gone wrong today.”

She hung her head in her lap and began to cry for real.

Ryan had to hold back a smile. She looked so much like a wet cat. And, to top it off, she had yet to hear how wrong things had really gone with the day.

Chloe’s face lit up with an expression he hadn’t seen in years. For a few moments at least he was back to being her superhero dad.

With an English teacher for a mom, DEANNE WILSTED, grew up reciting conjugation instead of nursery rhymes. Now, forty years later, she's sharing that special skill through her writing and her mothering. Her first book, a contemporary romance called BETTING JESSICA, was released October 2011. Her second Novel, UNTANGLING THE KNOT, is due out in February 2013 from Soul Mate Publishing. She is currently marketing her third book for publication and writing her fourth, fifth and sixth while blogging about the crazy stuff she overhears while writing.


I’m excited to announce that today another author is visiting Novel Moments. Hazel Statham, the author of For Love of Sarah would like to introduce us to her novel. And also to tell us about her typical day as an author and where she gets her inspiration. 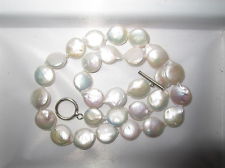 
Please follow the tour and comment to increase your chances of winning. The tour dates can be found HERE.

Hazel, welcome to Novel Moments. Over to you. 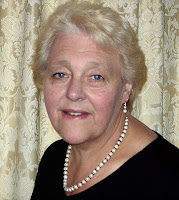 I have the luxury of being able to write as and when the muse strikes me, although I prefer to take to the computer when the house is empty so I can listen to my characters and the story they have to tell.

Being semi-retired, my husband now only works two days a week and it is these two days I can make my own.  Mollie, our lovely Labrador, is usually the only one to bear me company, but she is very undemanding with only the occasional foray into the kitchen to see if there’s any food on offer.  Other than that, a cuddle suffices and she’s content to sit on her chair in the window and watch the world go by.

However, if my characters are particularly forthcoming with their story and the house is occupied, I can retire to the bedroom if necessary.  I wish I had the luxury of an office where I could lock myself away from all interruptions, but sadly, it’s not to be, so I have to make use of what space is available and write with my laptop on a small glass table in the lounge.  I don’t write to a formula and am able to just go with the flow.

Inspiration comes from many sources, but especially from my characters who demand to tell their own story.   I have a very fertile imagination and need only a line from a song, a dream or just a few words in a totally unrelated play to set thought in process
For Love of Sarah
by Hazel Statham
BLURB 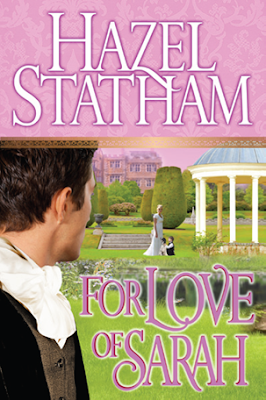 How many times can a heart be broken?  How many times can love be denied? Sarah and Alexander were destined for each other but after just four short weeks of marriage, their lives were torn asunder.
Alexander, Earl of Thorne thought he had found his ideal mate but, when Sarah absconded shortly after their marriage, his world came crashing down.  Now, five years later, he discovers her in a remote Yorkshire village.
Sarah had thought she was safe, but when, severely injured in a freak accident, her husband is thrust once more into her life, she fears her dark secrets and the fact she has a son, will become known.
Despite her own desperate longings, she continually repudiates Alexander’s efforts of reconciliation. However, fate conspires against her, and when her home is made uninhabitable by floods, she and her young son are forced to accept his aid and return to her former home.
Discovery threatens and, despite her breaking heart, she plans to leave Alexander’s life.  What is this secret that makes it so imperative that she should abscond from him yet again?  Can two broken hearts cleave and emerge victorious or will life's cruel forces tear them apart forever?

“There is no man with whom I live. I am thought to be a widow by the villagers.”
“A widow? By God, you would feel so, in fact, if I were able to leave this accursed bed. He would find no place to be safe from me!”
“There is no one,” she cried, her voice rising to the verge of tears.
“Then he has left you,” stated the earl, coldly. “Taken what he desired and left you to bear the consequences alone. Or did he discover your duplicitous nature and decide he would not play the fool to your deception?”
“My nature is not at all as you suppose, sir. I merely fell prey to a circumstance that has blighted my life.”
“Infidelity and desertion are definitely circumstances that blight your life, and those who are associated with you. When I sought your brother, it was reported that he had gone to India. Even your grandfather is in ignorance of your whereabouts. I thought you may have flown to him, but when I looked for you there, he had no more information than I and the poor man is desperate for knowledge of you.”
And if he should have that knowledge, he would disown me and his life would be in ruin. “It is best that you and he should forget my existence. I have built a new life far removed from your world.”
“You are still my wife, Sarah!”

Hazel Statham began writing at the age of fifteen, finally committing to paper the stories she spun as a child. Writing has been her passion ever since, although marriage, motherhood, and career left time for little else. Once she retired, however, she was able to devote herself to writing full-time, publishing her first novel in 2007. A long time student of history, she writes mainly in the Regency and Georgian eras, though she has been known to dabble in the medieval as well. She lives in Staffordshire, England, with her husband, Terry, and their beloved yellow Labrador, Mollie.

Hazel loves to hear from her readers and promises to answer all mail.