Today I would like to welcome to Novel Moments, Monica La Porta, author of The Priest.
Welcome, Monica. Please Tell us a bit about yourself 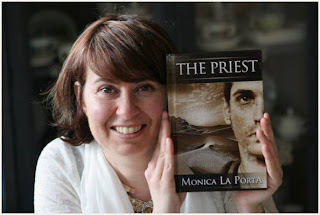 Thanks, Liz. My name is Monica La Porta and I’m an Italian who moved to the States several years ago. I love to say that I found the perfect weather for writing in Washington State, because it’s true. The green, the misty vapors, the constant drizzling are all conducive to writing. I spend hours looking outside my window, cup of perfumed Earl Grey tea handy, daydreaming about all the stories taking places beyond the realm of my backyard.
What keeps you writing?
I love writing. It’s my vacation from reality. I think about writing day and night. When I’m not writing, I’m editing or thinking about what I want to write next.
Can you tell us a little more about your novel, The Priest? Amazing cover, by the way.

Thank you, Liz. The Priest is the first book in a trilogy, The Ginecean Chronicles, and is set in an alternate reality where women have absolute power over a race of enslaved men and the only socially acceptable union is between women.  Loving a man is considered a perversion. The main character in The Priest is Mauricio, a slave resigned to a hopeless life. One day, he hears Rosie sing and his life is changed forever. Love is born where only hate has roots.
What inspired you to write the novel?
Two main ideas are behind The Priest. Two years ago, I read an article about the possibility for a woman to create life without the man’s contribution. Around the same time, I heard about the campaign ‘It Gets Better’ in support of kids being bullied because of their sexual orientation or because they are different. I asked myself what would happen in a society where everything was the other way around compared to ours? What if we lived in a woman’s world? What if heterosexual love was a sin?
How did you come up with the title?
Names have meanings and I like playing with them. Almost every book I wrote has a character whose name stands for something relative to the story. In The Priest, the title’s meaning is explained at its very end.
How long did it take you to research and write the novel?
The Priest has an interesting genesis. I was writing Pax in the Land of Women, when these two characters, Mauricio and Rosie, came to life. I thought they were too interesting to be relegated to a small part in Pax. So, I decided to use Nanowrimo 2010 to write down the first draft of The Priest. In one month I wrote the bulk of it, then I polished it for another year. Finally, I went back and forth adding and erasing details to the three books in The Ginecean Chronicles to eliminate incongruences.
Is there a certain message you would like readers to get out of this novel?
Acceptance. Everything is relative. What is acceptable in a society could be taboo for another. Love is love.
Do you experience writer’s block? How do you deal with it?
I write every day, even when I don’t feel to. My goal is one thousand words per day and I normally manage to achieve that. Sometimes, it’s harder. I found that the best ideas come in days like that, when I push myself to finish and I struggle through every word I write.
Are you a full time writer? If not, how do you make time to write?
I’m a full time writer and a housekeeper in my spare time. Since I feed the family regularly, nobody has complained so far.
How does your daily writing schedule look like?
For the most part, I keep office hours. During Nanowrimo, there’s no schedule; I just write until I drop.
How does your marketing schedule look like?
It doesn’t. I’ve published only a few months ago and my marketing skills are laughable. I’m on twitter, where I like to talk with other authors. I’m on facebook, where I like to talk with other authors. I’m on Goodreads, where I like to talk with other authors. I’m on Kindleboards, and you can imagine what I like to do there. If marketing has anything to do with getting to know interesting people, I’m okay. Otherwise, I’m not.
Which avenues do you use to market your books?
Mainly twitter and hopefully word of mouth.
What books can we expect from you in the future? 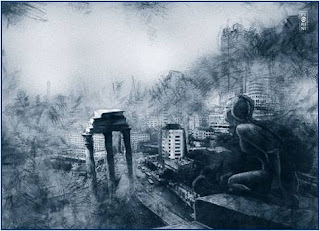 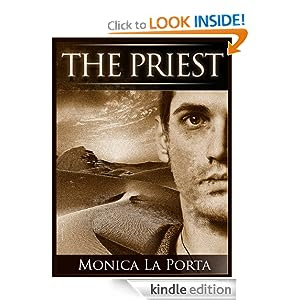 Mauricio is a slave. Like any man born on Ginecea, he is but a number for the pure breed women who rule over him with cruel hands. Imprisoned inside the Temple since birth, Mauricio has never been outside, never felt the warmth of the sun on his skin. He lives a life devoid of hopes and desires. Then one day, he hears Rosie sing. He risks everything for one look at her and his life is changed, forever. An impossible friendship blossoms into affection deemed sinful and perverted in a society where the only rightful union is between women. Love is born where only hate has roots and leads Mauricio to uncover a truth that could destroy Ginecea.

Posted by Liz Grace Davis at 7:55 AM 4 comments

Cover in the spotlight--Practice Cake by Dalya Moon

It's time to brighten up my blog with a cover I admire. I've always loved the cover of Practice Cake, a YA romantic comedy by Dalya Moon. It's so pretty and refreshing, don't you think? It sounds like a great read too.

There’s one thing Maddie finds more tempting than red velvet cake: her co-worker, Drew.  All it takes is one of his sly winks or a playful hip-check by the cooler, and she’s incinerating the cookies. Her boyfriend would not approve.

When a reality TV crew descends upon the bakery, her simple summer job gets even more complicated.  Maddie could become the Bakery Network’s next breakout star, if she can handle the heat of being cast as a show villain.  Drew has an alternate idea: run away from everything, with him and his sexy tousled hair. She decides to take the leap, but when she finds out Drew’s been hiding a shocking secret, Maddie looks down at her packed suitcase and takes a moment to think. She could fly off to Australia with a guy she hardly knows, or she could pick up her suitcase and hit him with it.

Who can Maddie turn to for advice? Her sister has terrible taste in boyfriends, so she’s out. Roxanne, the charismatic reality TV show producer, has some interesting opinions, but may be more interested in ratings. Maddie’s best friend keeps pushing her cousin Hudson, a guy who thinks he’s too cool for entry-level jobs, but makes origami. Come on. Origami?