Today I would like to welcome to Novel Moments, Annette Bower, who would like to talk to us about her novel, Moving On: A Prairie Romance. Nice to have you here, Annette. 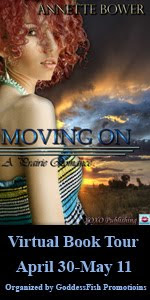 Good morning Liz. Thank you for hosting me on your blog today.

My family and I lived in Regina Beach, Saskatchewan for many years and I knew Regina Beach, a resort community, would be the perfect setting for a story about adapting to change.  It is a small and tight knit community in the fall, winter and spring but in the summer it becomes a very different place when it swells to ten times the usual population. Anna moves to town in the spring just before the summer residents and visitors arrive, therefore she is a visible stranger.

Anna is at a junction in her life. Murray, her fiancé, was badly injured on the job. Anna, a trauma nurse, couldn’t save him. Instead of walking down the aisle to meet him she followed his casket. She couldn’t work to her capacity; and had to go on a stress leave from her job. She received a notice that Murray was the beneficiary of a cottage in Saskatchewan, two provinces west from her province of Ontario. Because Murray had changed his will, Anna became the owner of a mystery cottage. She packed many of her things in a storage locker and drove twenty-six hundred kilometers to what she hoped would be a different life. “The windows were dirty and the exterior paint cracked and flaked. This was just the place she needed if as they say, your environment reflects your state of mind. Maybe in this place they would get off her back.”

She arrived in the small town and kept her counsel. Just after Margaret Lamb, Anna’s neighbor came over and asked her name:
“Anna Jenkins.” She held her breath. She hoped that the months since the accident were enough time for sympathy not to cross her new neighbor’s face. She’d had enough of that. This pity party was over.”

I explore what it is like to move from a large urban center to a small town and all of the quirks that go with it which includes a certain loss of privacy. But loss also provides the benefits of caring friends who help both Nick and Anna heal and grow.

“Can’t get too lost in this town, especially a new woman and pretty to boot! You should have heard the tongues clattering on coffee row this morning.”

“People talked about me?” She reached for the railing.

“They more or less speculated. You’re news. Some of the fellows were commenting about your packing. I didn’t get that one.”

Her cheeks burned when she remembered her butt pointed to Centre Street for all to see. Bile burned in her belly. “I’ll have to watch my P’s and Q’s.”


Nick is a sergeant in the Canadian Armed Forces who is adjusting to life with a prosthesis replacing his lower left leg because of an injury his sustained in Afghanistan. While Nick is home rehabilitating from his injury, his father leaves on a vacation and Nick is forced to run the B&B while he lends his expertise to his home town becoming a temporary town foreman.

I am fascinated with mourning loss and the process of beginning again. Nick and Anna recognize that they have something large in common. Loss. They are reticent and keep the facts close to their chest.


“He shifted away from her as if he sensed danger. Nick turned on his rubber-soled boots and almost leapt through the door. The moment was thick with fear. Anna caught a chuckle that ended up like a snort. They were like two wounded animals who suddenly found themselves in the same pen, wondering who was stronger and would survive. Surely she wasn’t attracted to Nick Donnelly just because they were both grieving their severed pasts.”
This book explores how our pasts are part of our present. Life’s challenges that we overcome or continue working on are a part of who we are. In the end both Anna and Nick choose to grow and thrive and bravely follow their hearts. 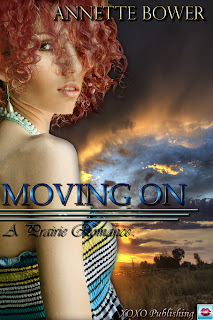 BLURB:
Anna is a mysterious woman that has just moved to Regina Beach. The residents of the small town know everyone’s business and they are very interested in discovering Anna’s secrets. Nick was a Sergeant in the Canadian Army, doing active duty until a horrific accident sent him home to recover. He helps Anna feel safe and comfortable in her new environment, just as he has always done for his men in strange, dangerous places. Meanwhile, he focuses on preparing for his future physical endurance test to prove that he is capable of returning to active duty.

Anna doesn’t talk about her past, and Nick doesn’t talk about his future therefore she is shocked to discover that his greatest wish is to return to active duty. She won’t love a man who may die on the job again. Intellectually, she knows that all life cycles end, but emotionally, she doesn’t know if she has the strength to support Nick.

Anna plowed through fallen leaves and broken twigs that were spread over the stone pathway leading to the stairs. The screened summer door sprung open but the solid weather door refused to budge. She twisted the key, jiggled the door knob and finally she turned sideways and bumped her hip against the stubborn paint- encrusted door. Banging against something and having it move felt wonderful. The momentary hip sting was an annoyance compared to the pain that she’d endured over the last year. Taking a deep breath she pushed the door open, inhaled stale air and watched dust motes floating on current of outside air.

The lawyer hadn’t known if Murray had spent any time here. Part of her wanted to look around and think of him as a carefree child, then a young man whole and alive, while the other part of her wanted a clean slate.

Anna ran her hand over the white refrigerator and matching stove and trailed a finger in the dust on the country kitchen table and solid chairs. Through a large window was an expansive view of blue water. Her tongue stuck to the roof of her mouth reminding her that she was thirsty. Anna turned the taps at the kitchen sink. They squeaked, but nothing came. All that water out there but none where she was going to live. She walked down a hallway and peered into rooms until she found the bathroom. The taps in the sink and tub repeated the noise and the toilet had green liquid in the bottom. She stomped her feet against the tiled floor. Damn. There were a few bottles of water in the car, but how would she use the other facilities? She didn’t know how to rough it; Murray was supposed to teach her how to camp in the wilds.

I have just been reading MOVING ON on my Kindle. It's lovely... -- a gentle, feel-good book with a nice variety of individualized characters and a positive over-all message. The familiar setting was a treat too. Congratulations! I would recommend it. - Mary Balogh: http://www.marybalogh.com/

“Moving On: A Prairie Romance” by Annette Bower In “Moving On: A Prairie Romance”, Annette Bower explores the redemptive power of affection. When we meet Nick and Anna, the characters at the centre of the novel, both are reeling from devastating personal tragedies, and both are fearful of making a connection that would open them to future pain. In the course of the novel, Nick and Anna slowly but surely learn to trust and to hope. Bower’s warm tale of the coming together of her two very likable protagonists is told with a keen eye and an understanding heart. This lake-side romance is perfect summer reading. ….Gail Bowen, author of the Joanne Kilbourn series.  http://www.gailbowen.com/

AUTHOR BIO
Annette Bower lives and writes in Regina, SK Canada. She is an author of many short stories published in anthologies and magazines in Canada, the United States and the United Kingdom. She explores women in families, women in communities and women at the beginning and end of love and their quest for love. She pursues the writing craft in workshops, conferences, Writing with Style, Banff Centre for the Arts, Victoria School of Writing, Sage Hill Writing Experience, the Surrey International Writing Conferences and the Romance Writing of America Conferences.

When she isn’t writing she walks or bikes around the streets and parks in her neighborhood imagining complex worlds behind seemingly ordinary events.

Her first contemporary romance, Moving On A Prairie Romance is published by XoXo Publishing™ a division of Ninni Group Inc.

Annette will award a $25 GC to one randomly drawn commenter. Please follow the tour and comment to increase your chances of winning. The tour dates can be found here: Goddess Fish Promotions